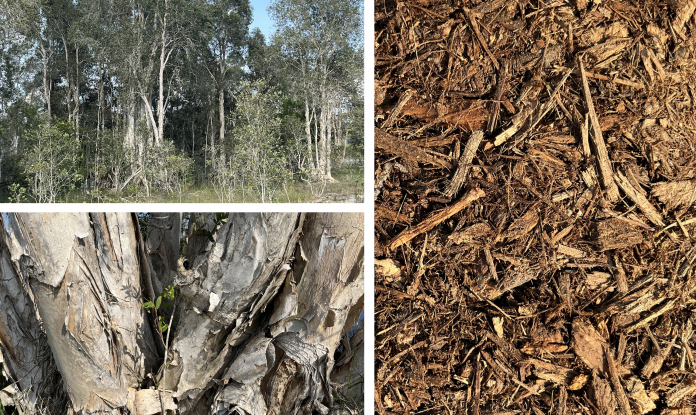 Horticulturally, the importance of mulching in Florida is better realized through an understanding of local conditions.   Many areas are characterized by sandy soil with very low water-holding capacity1, and closely associated very low nutrient-holding capacity2.  The benefits of mulch include moderating soil moisture, retention of nutrients, exclusion of weed growth, and moderating soil temperature3.  As mulch decomposes over time, resultant organic matter becomes incorporated into the actual soil3.

Melaleuca is a non-native invasive that grows in south Florida without cultivation, representing a perpetual source of mulch4.  The innovator of using melaleuca as mulch was Forestry Resources Inc., now The Mulch and Soil Company, in the early 1980s.  At that time there was growing realization of the need to control the invasive melaleuca.  Mulch was found to be a very efficient utilization.

Melaleuca seeds, after flowering and pollination, are formed inside woody capsules about three-sixteenths inch in diameter6.  The actual seeds are miniscule, as each woody capsule contains 200 to 350 seeds6.   The seed-containing capsules can persist on branches for several years, and a mature melaleuca tree can be laden with hundreds of thousands of seeds6.  The seed capsules open to release seeds when moisture loss occurs as a result of vascular interruption from and of the tree, caused by factors such as damage, fire, or being completely cut off6.

Chipped melaleuca is piled high and composted for several weeks7, with a monitored balance of moisture, aeration, and carbon to nitrogen ratio8. The method is referred to as “hot composting” because of the heat generated from the composting activity of microorganisms8.  The process breaks down the content of melaleuca leaves and causes any seeds therein to lose viability.

The floatability of mulch depends on its density.  Melaleuca wood has high density, higher than Baldcypress wood9. However, Melaleuca has a high bark-to-wood ratio, and the bark is low density10.  Nevertheless, Melaleuca mulch was found to have higher bulk density than cypress, pine, and eucalyptus mulches11, and therefore less likely to float and become displaced if flooded.

Trees have a profound influence on their surroundings in natural habitats and in landscaping.  Using melaleuca as mulch has the simultaneous benefit of controlling the invasive species while offering an alternative to mulches of native cypress and pine8.  Furthermore, melaleuca has superior characteristics for use as a mulch.  Melaleuca mulch is pertinent to sustainability regarding people’s landscapes, local ecology, and economic potential.

5Duryea, M. L. 2017. Landscape Mulches: How Quickly Do They Settle? Document FOR 69. University of South Florida, Institute of Food and Agricultural Sciences.