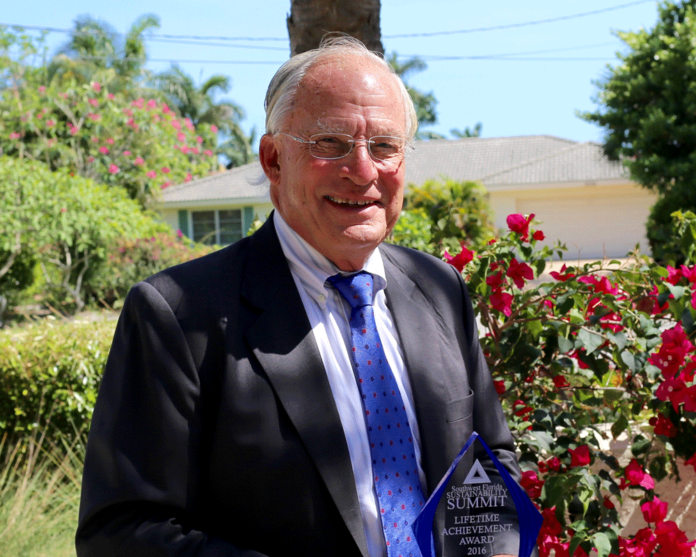 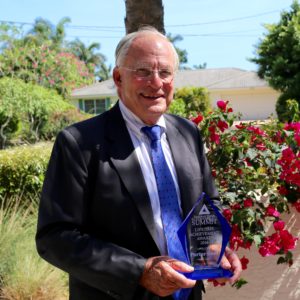 Former Congressman and CIA Director Porter Goss received the inaugural Lifetime Achievement Award. The Goss family has made a strong commitment putting community first in Southwest Florida. Porter Goss invested his life in demonstrating this commitment to making southwest Florida a better place to live, work, and raise a family through public service.

About his father’s award, Sanibel City Councilman Chauncey Goss shared, “Congratulations on the second successful sustainability summit. Quality of life is what brings our residents, tourists, and businesses to southwest Florida. Sustaining that quality of life will not happen by accident, but through dialogue and a thoughtful exchange of ideas. The Sustainability Summit does just that.”

Nominated by Sanibel Mayor Kevin Ruane, Porter Goss has demonstrated a lifetime commitment to improving our Quality of Life in Southwest Florida.

“Porter Goss forged a community committed to a unique focus on protecting the environment as the community’s top priority,” explained Mayor Ruane in his nomination of Mr. Goss. “As Sanibel’s first Mayor, Porter Goss put into place environmental protection legislation that has endured the test of more than four decades of assault. Through today, Mayor Goss’s leadership, vision and foresight are imprinted on every square inch of Sanibel.”

WeVets and SWFL Sustainability announced the “Major General James L. Dozier” Award for Veteran Support. This award will recognize one outstanding nonprofit and one for-profit business who has proven their commitment to veterans ranging from support programs, scholarships, to employment. We are proud to announce that General Jim Dozier, a local hero, will chair the review committee made up of community and business leaders.

The Summit featured a new and exciting Electric Car Show with a Tesla Model S inside the gallery of the hotel, accompanied by an electric vehicle from Florida Power & Light.