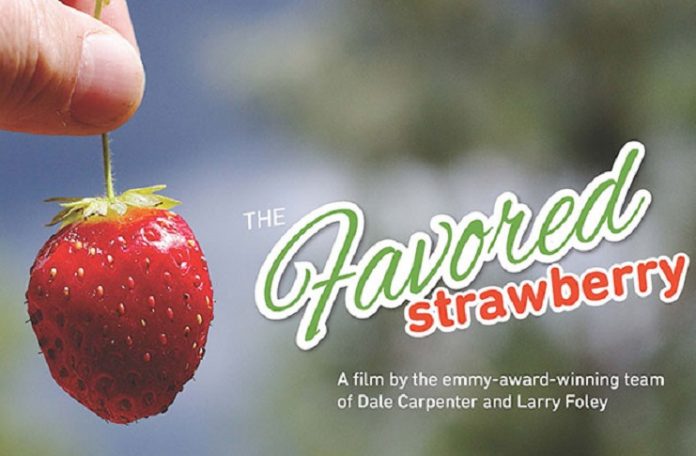 Multiple screenings are scheduled for The Favored Strawberry, which is the culmination of a national project led by the University of Arkansas System Division of Agriculture and its Center for Agricultural and Rural Sustainability. The documentary tracks the four-year National Strawberry Sustainability Initiative, which was funded by the Walmart Foundation.

Heather Friedrich in the Dale Bumpers College of Agricultural, Food and Life Science’s Horticulture Department, is program manager, and Curt Rom, associate dean in the U of A Graduate School and International Education, is director. Rom, one of the CARS directors, was a University Professor of horticulture when the project began.

The Favored Strawberry was produced by the Emmy Award-winning duo of Larry Foley and Dale Carpenter. Foley is professor and chair of the U of A Walter J. Lemke Department of Journalism, and Carpenter is a journalism professor.

“The National Strawberry Sustainability Initiative project has been very successful,” said Rom. “It is developing into a continuing effort generating national interest. The documentary is a final piece of the strawberry project and was an enjoyable collaboration among the U of A faculty working with the team of Dale Carpenter and Larry Foley. They have made a truly enjoyable film.”

“I love strawberries and I loved making this film,” said Foley, who was also the writer. “It’s a fun story, but it’s also a story about the hard work by the farmers and the pickers who get strawberries to our local grocery stores year round. People have been asking me ‘who has the best strawberries?’ The answer is simple, they’re all delicious, especially when you stand in the farmer’s field, and pick and eat right from the field.”

The film includes stories from farms, large and small, where strawberries are picked by hand, one by one. The documentary was filmed across eight states, including Arkansas, Oklahoma, Texas, Florida, New Jersey, North Carolina, Maryland and California. The Arkansas story features local grower David Dickey, following him through every step of the process – plowing, planting, harvest and sales at the Fayetteville Farmer’s Market.

The film’s world premiere is March 9 at Plant City, Florida, in conjunction with the Florida Strawberry Festival and a meeting of the National Strawberry Sustainability Initiative project leaders. The film’s showing is sponsored by WEDU, a PBS station at Tampa, Florida. Local screenings are May 2 in Fayetteville at the Botanical Garden of the Ozarks and May 17 at Bentonville’s Crystal Bridges Museum of American Art. Foley is also presenting the documentary at 10 a.m. on May 16 at Concordia Retirement Village in Bella Vista. Other screenings will be announced soon.

DVD copies of the documentary will be available through the U of A University Press.

The National Strawberry Sustainability Initiative was created in 2013 with a $3 million donation from the Walmart Foundation and an additional $1.05 million donation in 2014. The goal was to move sustainable production forward by focusing on new and proven technology, demonstration, outreach, extension and education.

The initiative comprises 26 projects in 13 states, reaching more than 6,800 growers and 4.2 million people nationwide. Results of the project have been summarized in e-books, Moving the Needle: Accomplishments of the National Strawberry Sustainability Initiative 2013-2014, and Success in the Field: Accomplishments of Phase II of the National Strawberry Sustainability Initiative 2014-2015.

The Favored Strawberry documentary is the capstone of the project, and will be screened and distributed nationally to increase awareness of the value of strawberries in the agricultural food system and to consumers.

About the Dale Bumpers College of Agricultural, Food and Life Sciences: Bumpers College provides life-changing opportunities to position and prepare graduates who will be leaders in the businesses associated with foods, family, the environment, agriculture, sustainability and human quality of life; and who will be first-choice candidates of employers looking for leaders, innovators, policy makers and entrepreneurs. The college is named for Dale Bumpers, former Arkansas governor and longtime U.S. senator who made the state prominent in national and international agriculture.