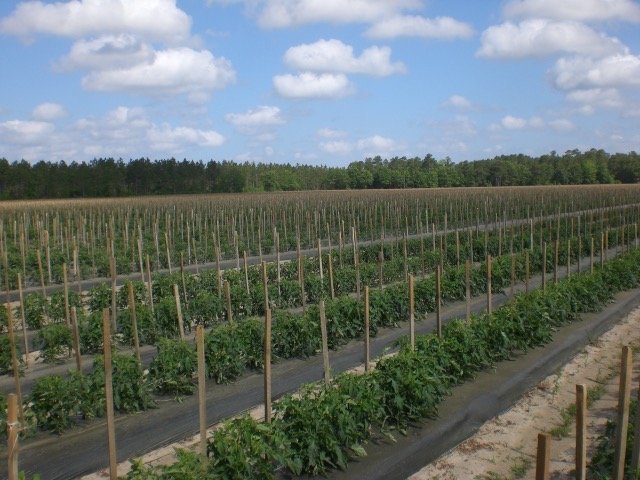 “If you build it, he will come.”  That’s the ethereal message that inspired Iowa farmer Ray Kinsella (Kevin Costner) in the movie Field of Dreams to construct a baseball diamond in the middle of his cornfield.  That message resonates with me in many ways with regard to the recycling of agricultural plastics.

Plastic products and packaging have become an integral part to all aspects of farming.  Plastic films are used to wrap forage, to cover greenhouses, and to mulch fields of vegetables and fruits like tomatoes and strawberries.  Most nursery containers are made of plastic, as are the containers used for pesticides and dairy sanitizers.

Irrigation and maple tubing are plastic.  The list goes on.   Much of it has been burned in the field, generating dioxins and other pollutants, or dumped in some out of the way place on the farm.  In addition, plastics are buried in landfills.  The options for farmers to recycle these used plastics have been neither robust nor sustainable.

I have been working on the subject of agricultural plastics management since 1999 when the Southern Waste Information eXchange, Inc., a 501(c)(3) non-profit organization, was asked by the Florida Department of Environmental Protection to conduct a Technical Advisory Group or TAG on the subject of dealing with the large volumes of agricultural film mulch being generated in Florida on an annual basis.

The following summarizes some of the background information on agricultural plastic use/generation as presented by Mr. Arthur Amidon of Amidon Recycling at that TAG in 1999.

Nursery containers are estimate to make up over half of all U.S. agricultural plastic – 422 million pounds.

The various management methods for this waste stream includes: 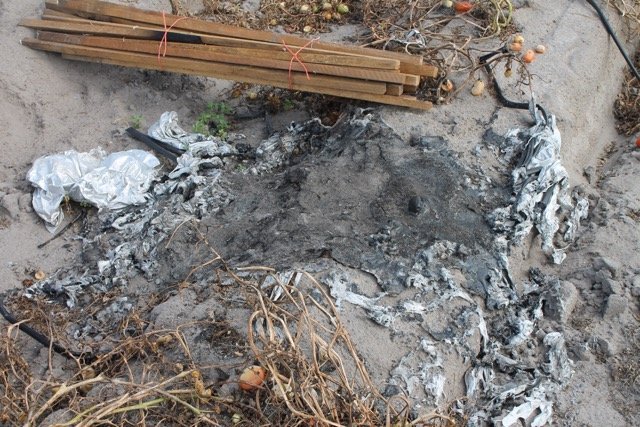 Very little, if any, of this material is recovered for recycling.  It is either burned in small piles in the field (after the used mulch is gathered by hand laborers who pile it at the end of each crop row) or buried in Class I and III area landfills.
As stated from Mr. Amodon’s presentation, the bulk of agricultural film mulch in Florida is reported to be managed via open burning at the end of the growing season.  This is allowed through Florida Administrative Code 403.707 (2)(e):

Trying to Solve the Problem 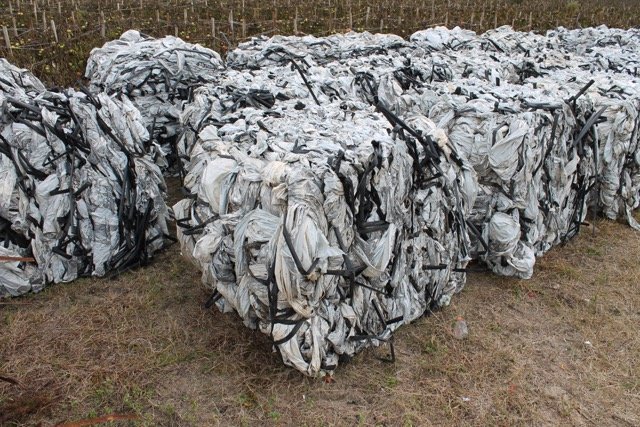 The answer comes down to contamination level.  Mainly soil.  Take a look at the bales of ag film in this picture.  These are bales that are generated by a tomato farmer that is having his film recovered for recycling overseas.  These types of bales are produced from a Bacca Baler or Big Foot Baler that are on the market to bale Ag film in the field.  The bales weigh in the neighborhood of 1,250 pounds.  What looks like all recovered film is actually on average about 60 – 70% soil and moisture.   Yes, you read it correctly, 60 – 70% soil and moisture! 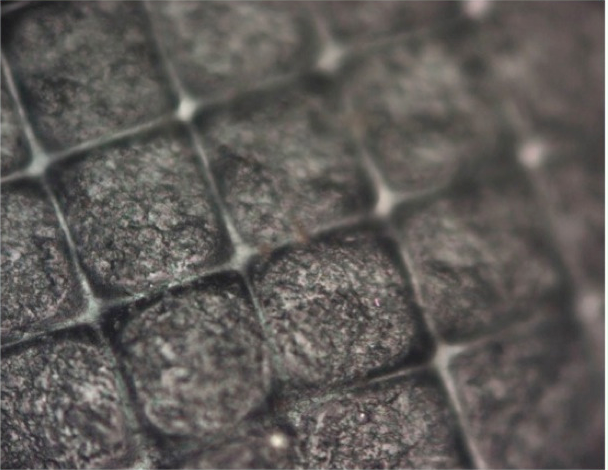 .  The micro pattern acts like a suction cup causing moisture and associated soil to adhere to the film.  The picture to the left is a view under a microscope of a sample of Ag film collected from the field.  Notice the square pattern on the film and the crystal particle.  The crystal particle is a grain of sand 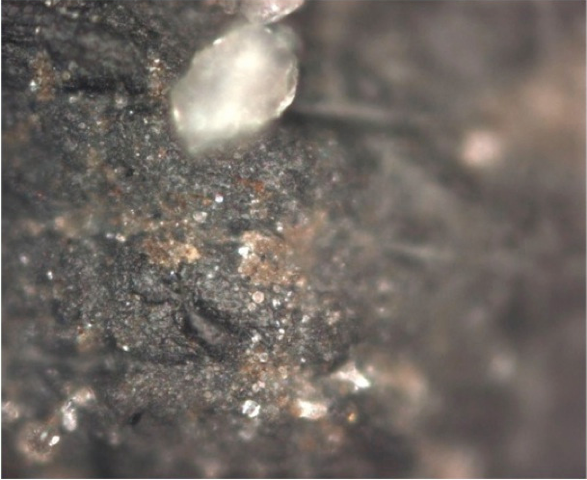 .  That is how small the micro pattern is.

The soil contained in the recovered film causes havoc with shredding equipment.  During a trial with Suwannee American Cement (SAC), we sent 3,500 tons of baled Ag film for an alternative fuels trial.  The film was shredded in a primary dual shaft shredder then feed into a single shaft secondary shredder with a 2 inch screen to be pneumatically injected into the kiln.  Ag film has great BTU value but not with the amount of soil contamination that was discovered to remain on the film.  The film burned at such a high temperature (> 2,500F ) burns much cleaner than coal which is traditionally used by most cement kilns.  The amount of soil contained on the film forced SAC to change out its shredder blades at the end of every week at the cost of $16,000 a pop.  After the trial was over the SAC said Thanks but No Thanks to any more Ag film.  Lesson learned the hard way.

Advances in the Market

Several players are coming on board to address the issue of recovering agricultural plastics, mainly agricultural mulch films from the field and recycling it.

Command Packaging/Encore Recycling based in Salinas, California opened up a state of the art closed-loop system last year to divert discarded agricultural plastics from landfills and recycles it into high quality raw material.  The recycled plastic is then sold to manufactures who in turn make more recyclable products.

Some of the largest multi-national and recognizable names such as, Dole, Driscoll, Pacific Gold Farms, Ramco, Red Blossom Strawberries, as well as many independent growers, are working with Encore® Recycling to ensure that their plastic is collected and recycled.

For more than a decade Delta Plastics has collected used irrigation tubing and recycles it.  Delta has branched out and is looking at agricultural mulch films as well.  Their fleet of collection trucks picks up used Ag plastics from authorized collection sites to provide farmers with a free, convenient way of removing agricultural plastics.  Delta recycles the used material to produce a postconsumer resin that is then used in various plastics industries.

Brand new to the market are firms like RecyPoly to be located in Labelle, Florida and Florida Agricultural Plastic Recyclers, LLC to be located in Avon Park, Florida.  Both of these firms are setting up shop to be able to recycle agricultural mulch films and drip tape. 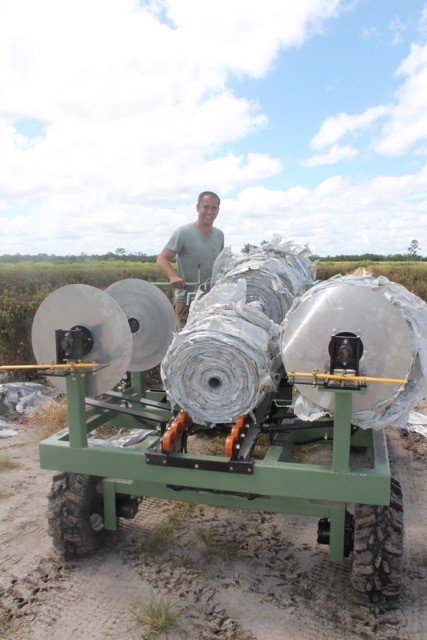 FIELDClean of Florida has developed a process of extracting agricultural films from the fields and then integrate the collected films into a proprietary dry cleaning process called FilmCleanTM.  The first plant is now in operation in Valley Alabama.  The company plans on setting up several micro dry cleaning plants in Florida.