State Parks in SWFL: The Character of The Community

Florida’s character is shaped by the tides and the salty surf. Islands, the Everglades, sunny beaches, shading mangroves and tropical climate shape the lives, livelihoods and ways of life for all of Florida’s characters.

The parks listed below are just a few state parks that preserve Southwest Florida’s landscapes, culture and history. 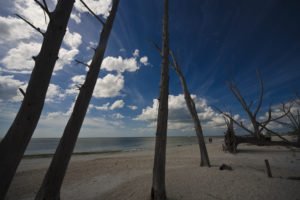 The 2.5-mile Black Island Trail winds through a maritime hammock along the canal banks of Black Island for hikers and bicyclists. According to local legend, Black Island got its name from the pirate Black Augustus. Authorities caught and imprisoned the pirate, but he escaped to the island, where he spent his retirement years. 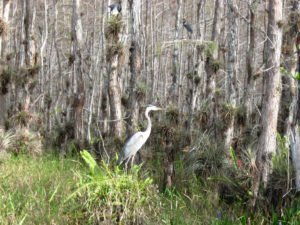 The Fakahatchee, approximately 20 miles long and five miles wide, is a thread of forested swamp in Big Cypress, a section of the Everglades that has been sculpted by the movement of water for thousands of years. Beneath a canopy of bald cypress trees flows a slow moving, shallow river that provides habitat for aquatic life, a water source for the park’s native animals and nourishment to the estuarine ecosystem of the Ten Thousand Islands.

The Fakahatchee’s groves of native royal palms are the most abundant in the state. Fakahatchee Strand is the only place in the world where bald cypress trees and royal palms share the forest canopy. Beneath the canopy, botanists have documented 44 native orchids and 14 native bromeliad species within the park.

Guided swamp walks lead visitors into the strand to see tropical ferns, bromeliads and other native plants and animals. Several old logging roads provide high ground for hiking the area. Visitors can drive through the wilderness along Janes Scenic Drive or take a tram tour. 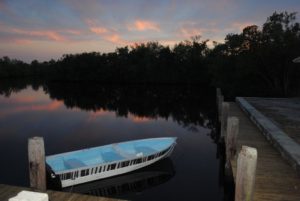 Collier-Seminole State Park is one of only three sites in Florida where native royal palms grow in abundance in their natural setting. Hiking, bicycling and paddling trails allow visitors to explore the mangrove ecosystem and see the native plants and animals within that system.

The park’s adventure trail includes a cypress swamp with clear, cool water. Depending on recent rainfall, the water could be waist deep. Bring a canoe or kayak to explore the paddling trails or rent one from the park. 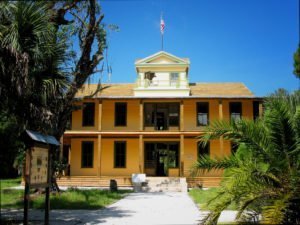 Florida attracts its share of characters – Cyrus Teed was one of those characters. Inspired by a vision, Teed established a new faith and changed his name from Cyrus to Koresh. He and his followers believed that the universe existed within a giant, hollow sphere. They conducted experiments that seemed to support their beliefs.

Teed and 200 followers relocated from New York to Florida in 1894. There, the Koreshans built and operated a printing facility, boat works, cement works, sawmill, bakery, store and hostelry.

When Teed died in 1908, the movement he founded declined, although members continued to live at the site until 1982. In 1961, the last of the Koreshans deeded 305 acres of their land to the state of Florida as a park and memorial. The Koreshan Unity Settlement Historic District is listed on the National Register of Historic Places.

What remains of their community are 11 historic structures that date from 1882-1920. Their landscaped grounds include ornamental exotic vegetation from around the world. Today, visitors can camp, fish, picnic, boat, hike and tour the settlement where the Koreshans built their utopia.

Florida State Parks are open from 8 a.m. until sunset. Reserve campsites at Koreshan online at http://floridastateparks.reserveamerica.com/. Learn more about your state parks at www.FloridaStateParks.org.